My last act before fleeing the country was to register for Linear Algebra for undergraduate credit at the Harvard University Extension School.

I officially are a student again.

treptoplax: I'll be needing your cell phone numbers and 24x7 access between now and the final exam... :-)

I'm off to Europe!

The partner I did training for in Germany last June asked work if they could send me back to train them some more. (In the current economic climate, having your company's largest European partner ask for you, specifically, can't hurt...) Work said, "well, money's tight, we don't know..." Partner said, "what if we paid for flights and hotels and you cover the rest?" Work said, "hey, that'll work." Partner said, "well, if we're going to pay to bring him out, we want him to do training in all our offices." I said, "Wow."

So, during the next week and a half or so, I'm running trainings in 4 cities in Europe, plus I have this coming weekend to myself. I managed to find a cheap airfare deal, so I have a 24-hour side-trip to Venice -- a place I have always wanted to see. The rest of the trip I'll have a couple seasoned European travelers with me, but the Venice trip is my own personal adventure into a country I've never been to and where I don't speak the language.

I expect to have Internet at the training venues if not at the hotels, so I'll upload pictures to Flickr as much as I'm able to.

I am, obviously, most excited about the Venice portion of the trip. I've always wanted to see Venice. I'll be staying at a hotel right on the Grand Canal. You can see pictures of the place here. I'm looking forward to walking the streets of Venice, to smoking a cigar while riding a gondola, and, ideally, getting involved in a high-speed jet ski chase through the canals, although I'm prepared to be happy with just achieving 2 out of 3 of these.

Trips reports, etc. upon my return. See you in a couple weeks!

U. Mass, Lowell only offers "I" during the fall, but I could take "II" in night school starting this month, but I'm not sure how much of a jump that is.

Today I begin a new feature of this blog: Unseen Reviews. In an "Unseen Review", I review a movie I haven't actually seen, based only on what I've been able to figure out about the movie from the trailer and movie ads.

Black Snake Moan looks to be, and I say this completely without any exaggeration whatsoever, the greatest movie EVER.

It appears to be a movie where the plot revolves entirely around Christina Ricci spending the entire movie chained up in her underwear. I mean, what more do you need to know to realize that this is pure cinematic genius? The only thing that could be wrong with this movie would be if it's too short. Clearly this is something that I must see on the Big Screen...

For a movie I've never actually seen, I have to give Black Snake Moan 5 out of 5 stars...

First, the obvious: Hello, and welcome to 2009. Happy New Year to you and yours.

A Request for Help

To really put number 2 into effect, and to start making the card catalog functional rather than decorative, I need to find a hole punch that will put a 3/8-inch hole in standard index cards.

It turns out that your "standard-size hole punch for three-ring binders, etc. punched a 1/4-inch hole. That's big enough to allow the metal guide in the catalog drawers to go through the cards, but not to allow them to be flipped through. With a 3/8-inch hole, the cards can stay secured in the drawer and be flipped through easily.

Now, I know for a fact that, at some point in time, people manufactured 3/8-inch hole punches. As proof of this, I point to every library card catalog that was ever easy to use, and well as the measurement I took of the hole in the cards that came in one of the drawers of my card catalog. So, logically, there must be some out there somewhere.

So, I appeal to y'all in the hopes that someone has better luck with search engines than me, or just that someone might know where to find one. Ideally, I'm looking for two different things:

Any pointers to where I might acquire either (or especially both) of the above will earn not only my eternal gratitude and esteem, but also, upon successful acquisition, a Bonus Point. :-)

remcat's results, so here are mine:

Your result for What Your Taste in Art Says About You Test...

The Renaissance was a cultural movement that profoundly affected European intellectual life. Beginning in Italy, and spreading to the rest of Europe by the 16th century, its influence affected literature, philosopy, religion, art, politics, science, and all other aspects of intellectual enquiry. Renaissance artists looked at the human aspect of life in their art. They did not reject religion but tended to look at it in it's purest form to create visions they thought depicted the ideals of religion. Painters of this time had their own style and created works based on morality, religion, and human nature. Many of the paintings depicted what they believed to be the corrupt nature of man.

People that like Renaissance paintings like things that are more challenging. They tend to have a high emotional stability. They also tend to be more concientious then average. They have a basic understanding of human nature and therefore are not easily surprised by anything that people may do. They enjoy life and enjoy living. They are very aware of their own mortality but do not dwell on the end but what they are doing in the present. They enjoy learning, but may tend to be a bit more closed minded to new ideas as they feel that the viewpoint they have has been well researched and considered. These people are more old fashioned and not quite as progressive. They enjoy the finer things in life like comfort, a good meal, and homelife. They tend to be more spiritual or religious by nature. They are open to new aesthetic experiences.

So, I haven't posted in a while, in part, I think, because I have this idea in the back of my head that my postings should be well thought-out and have some sort of profound point. Well, this one meets neither of those criteria.

Near Hallowe'en, things always get busy for our family, and this year was no exception, but this time I took more pictures.

Friday there was a Hallowe'en party at ATA and then

Saturday Clone #1 had a soccer game, then we drove up to Maine for a Hallowe'en party with letterboxers that

Sunday Clone #2's Cub Scout Den had an outing for which I ran the game.

Outside of the activities I managed to accomplish a few of the things I had wanted to this weekend, including applying my CDO to my Flickr sets and collections.

pokerclub, click here to view the announcement of the upcoming tournament.

Lots more to write about. Traveling to Orlando tomorrow for a work conference. Will try to post on some between-session downtime. 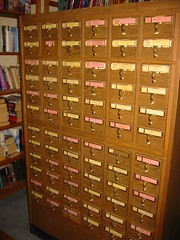 I spent most of Friday evening with my friend Mario and his pick-up truck. We drove to Watertown and picked up the beautiful piece of furniture you see in the picture.

Yes, those of you born before 1980 will recognize that as an actual library card catalog. This one was originally in a library at the Harvard Business School.

I've wanted one of these since I was a child. Some people will get this idea immediately, others won't, and those born later than 1980 are still wondering what this thing is and why it needs 72 drawers...

If you're in the group that gets it, well, I need say nothing more. But, if you find yourself in one of the other two groups, I'll try to explain.

OK, sorry, I should have warned you, or at least built up to that more slowly. 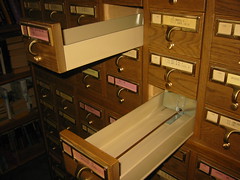 Anyway, back then if you wanted to know something, you couldn't just look it up. You had to go to the Library, and then you could look it up. Libraries were the Storehouses of All Knowledge, and (it feels to me anyways) contained even more books than they do today.

Of course, since there weren't PCs or workstations everywhere, you couldn't just walk up to a screen and type what you were looking for and have it tell give you a recommended list of books along with reviews and feedback and "X number of people found this book useful in answering questions similar to yours".

Well, how did you you find the knowledge you were seeking then?

If the library was the storehouse, the treasure trove of all knowledge, well, then the card catalog wasn't just a map -- it was the keys to the kingdom. 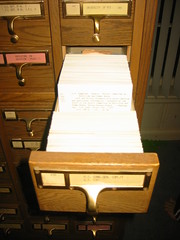 Within those drawers were hand-typed 3x5 cards that listed the books according to the Dewey Decimal System. You could look up these cards by title, by author, or by subject matter.

The Dewey Decimal number on the card you found would lead you to the correct section of the building, like a clue on a treasure hunt. It'd lead you to the right aisle, or if you were really lucky even to the correct bookcase. You'd still have to scan the shelves to find the exact book yourself -- and even then it wasn't certain that that particular tome would contain the exact knowledge you were seeking, which would mean another trip back to the card catalog -- but that was part of the fun.

Maybe you know someone who can always find things on Google. They've perfected the art of not only narrowing down the search criteria, but also of finding other ways to phrase it so that the search returns effective results. Working a card catalog well was like that, only it was hands-on.

If you were experienced, you'd look things up 3 or more ways up-front, scribbling your titles and Dewey Decimal numbers on slips of paper the library provided so that you had you first best guess and 2 or more contingencies ready, saving yourself the return trip to the catalog, as it was likely to be centrally located, but the shelves you would be searching might not be.

Combination Treasure Map and Keys to the Kingdom of the House of All Knowledge. Who wouldn't love one of these things?

It's been a while since I revealed the Secret Plan, and I figured that some of you are probably wondering, "So what's Dave's status with MIT?"

That, plus I could use some help.