It's just before 6AM, and I really should be sleeping, given how exhausted I am, but my body thinks it's nearly 11AM and woke me up... Hopefully I'll be able to get back to sleep.

The first set of pictures has been uploaded. You can see them on my Germany Trip Flickr set. I don't have descriptions up yet -- I'll be posting descriptions and a travelogue later. (I'll post again when that's done to save your continually checking back...)

Anyway, even without description, the pictures are still nice. Hmm. Maybe two things require context: Anyway, sleep for me. I think I present tomorrow.

In about two hours, the car comes to pick me up and take me to Logan Airport. From there I board a plane and fly over the Atlantic to Munich, Germany, where work is sending me for a week. I return on Friday 13 June.

During that time, I will not be reachable via phone (although

remcat does have emergency contact info for me if necessary. I will have at least daily access to email, so you can still reach me that way, but keep in mind that the time difference will skew response time, etc.

I've promised to take lots of pictures, and intend to put them up on a photostream on my Flickr account. I'll post something here when I get them there.

See you in a week!

After having heard about it for some months now, I finally decided to check out Twitter. Haven't decided what I think yet. Is anybody else playing with this? If you are, shoot me an email with your username and I'll contact you over there.

For those who don't know, Twitter calls themselves a "micro-blogging" site, which allows only short entries (140 character max) from web, text messages, or IM. In their own words (from their FAQ:

Twitter is a service for friends, family, and co–workers to communicate and stay connected through the exchange of quick, frequent answers to one simple question: What are you doing? Bloggers can use it as a mini-blogging tool. Developers can use the API to make Twitter tools of their own. Possibilities are endless!

Today's mail brought an envelope addressed to me, Clone #1, and Clone #2. The return address looked familiar.

Turns out it's an invitation to the Tewksbury Public Library's Volunteer Appreciation Night.

A very cool gesture. I mean, we do Chess Club for fun, but it's still nice to be appreciated.

I was down in the great state of North Carolina for work last week, which, coincidentally was also testing week at ATA. (Clones #1 & 2 passed last week.)

So, tonight, after a week and a half away from class I got up and demonstrated the forms for this test. Normally, testing like this has several people going in succession, but tonight it was just me up there alone in front of everyone.

Fortunately, I was born without the "Fear of Public Speaking/Performance" gene, so no problem.

While I was away, I practiced the form, plus I demonstrated it in a tournament Saturday, so no problem there. The tougher part of the test was the weapons form. You see, I'd thought about, then decided against, bringing a weapon on the trip with me. So I felt less-practiced there, but only because I was...

I'd forgotten about freestyle.

"Freestyle" is basically you and a weapon and 20 seconds to show what you can do. Normally, folks prepare their own personal "mini-form" that they've practiced. This makes sure you've got your technique down, and avoids the whole "Um, what do I do now?" problem.

Well, as I mentioned, I'd forgotten that freestyling would be part of the test, so I just went out there and faked it.

Long story short, I passed, but pretty much by the narrowest margin I have so far. But, on Friday, just before Poker Club, the Clones and I should be moving from 5th to 4th (they count down from 9th (white belt) on the way to black belt - once you have a black belt, they count up for degrees), green belt to purple belt.

Friday night was Scout Night at the UML (University of Massachusetts at Lowell) Riverhawks hockey game. Tickets for the Scouts were covered, additional tickets were $5 apiece. We had awesome seats - 4th row right near one of the goals. 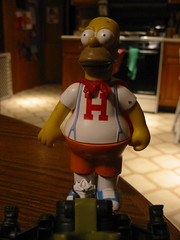 The Clones gave me this Super-Homer figure a few years ago. The close-up photo makes it clear that he's a little worse for wear, but when you're a toy that gets played with and chewed on by the Clones, well, that happens to you...